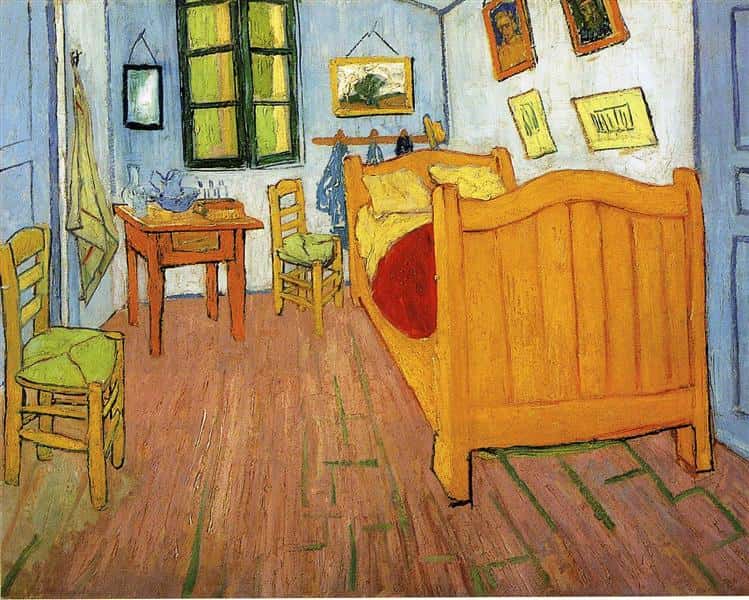 A small bedroom with muted but garish contrasting colors and lines that bulge and contract, the lines not running straight, and the lack of any shadows create a striking image of a distorted bedroom, the bedroom of Vincent Van Gogh in the Yellow House. Bedroom in Arles is a series of paintings by Van Gogh, of which he made three identical versions with minor changes. We’ll be looking at the first version.

The first time I looked at this painting, I felt that there was something off about it, but couldn’t figure what it was. After looking at it and analyzing everything about it, I understood what was going on. The painting is made like that intentionally.

The disregard for perspective and symmetry plays a role in giving the painting a distinct look. The foot side of the bed is massive in terms of the space it takes in the canvas. It becomes slander as it goes towards the head side. The same thing happens with the chairs and in the whole painting.

The lack of shadows is another agent in giving this painting the look and feel it has. With the natural source of light from the window, one would expect to see shadows rising towards the viewers. But there are no shadows and that confuses the viewers because the light source is everywhere.

The perspective for this painting puts the viewers at an elevated height, while the lines converge towards the far-end of the painting. This distortion creates a bedroom so unrealistic, yet so simple. There is no subject in the painting like there’s no light source; everything is the subject. With the lack of any grand element or beautiful scene, the artist shows a simple bedroom with minimal furniture. The painting’s beauty arises from the way he shows it.

The unusual perspective Van Gogh uses can also be seen in the painting The Night Café in the Place Lamartine in Arles, which I call the Ugly Beauty. But Van Gogh, like he uses the characteristic brush strokes to create a swirly pattern for the world outside, he distorts the world inside to give it a very personal look.

Why Van Gogh made this painting

Van Gogh had the idea to create a painting of his bedroom. That’s it, no grand scenery, no subject, no looking for an inspirational and awe-inspiring view that imagination always craves. The simple bedroom was selected, for its simplicity.

The colors used in the painting are not the same colors Van Gogh used. The original colors were discolored due to time, giving it a completely different look. Van Gogh’s intention of making this painting was to show a sense of rest, calming the restless imagination.

Instead, the garish colorful palette does the opposite, added with the asymmetrical construct of elements and distorted perspective, the painting gives a feeling of nervousness. It makes you feel as if things are in a “wobbly” state, about to fall, or slide down, almost like the bedroom is moving up.

The original colors used in the painting were much more soothing. Here’s an excerpt from one of Van Gogh’s letters to his brother Theo explaining the painting and the reason for creating it.

My eyes are still tired by then I had a new idea in my head and here is the sketch of it. Another size 30 canvas. This time it’s just simply my bedroom, only here color is to do everything, and giving by its simplification a grander style to things, is to be suggestive here of rest or of sleep in general. In a word, looking at the picture ought to rest the brain, or rather the imagination.

The walls are pale violet. The floor is of red tiles.

The wood of the bed and chairs is the yellow of fresh butter, the sheets, and pillows very light greenish-citron.

The coverlet scarlet. The window green.

And that is all–there is nothing in this room with its closed shutters.

The broad lines of the furniture again must express inviolable rest. Portraits on the walls, and a mirror and a towel and some clothes.

The frame–as there is no white in the picture–will be white.

This by way of revenge for the enforced rest I was obliged to take.

I shall work on it again all day, but you see how simple the conception is. The shadows and the cast shadows are suppressed; it is painted in free flat tints like the Japanese prints. It is going to be a contrast to, for instance, the Tarascon diligence and the night café.

Van Gogh was inspired by the Japanese print paintings and their aesthetics. This is why you see this bizarre symmetry and perspective in this painting. When he says that this painting was to give rest to the imagination, what he means is that the imagination does not have to seek a perfect frame for the painting, but rather look at the simple bedroom and be content with the simplistic beauty of it.

He also says that this painting is in contrast with the Night Cafe or Tarason Diligence. Taking Tarascon Diligence as the example (since it’s painted in the daytime), we can see there is a defined source of light as the shadows are carefully painted. This painting is the opposite of that.

The first painting above the coat hanger is possibly the painting Rocks with Oak Tree. The second painting from the left is the portrait of Eugène Boch, a Belgian painter. The third painting is called The Lover or the Portrait of Lieutenant Milliet. In other versions of Bedroom in Arles, there’s a self-portrait of Van Gogh hanging in the middle while the other two are unknown.

But those aren’t the easter eggs hidden in the painting. Apart from the towel, the cheese, brushes, and jug of water, there is something familiar near the bed. Take a look at the coathanger. There are three coats of different shades of blue hanging and a yellow hat as well. Looks familiar?

If you look at most of Van Gogh’s self-portraits, you’ll see him wearing the same blue overcoat and the yellow hat. Van Gogh loved blue and yellow and their combination. His overcoats and hat resting there is another indication of rest, of a state where he can sleep peacefully in this distorted house. This concludes the article. 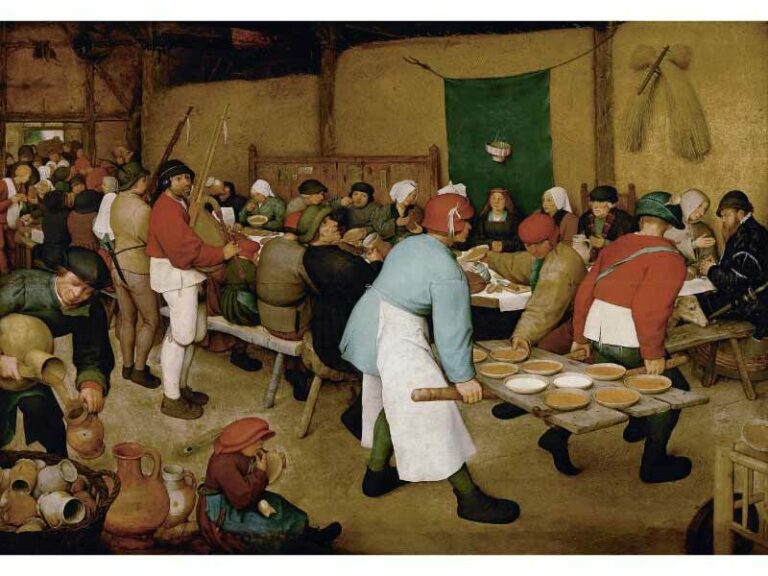 Most renaissance paintings focus on biblical or real-life heroes, kings, queens, and other important personalities. However, artists like Pieter Bruegel were drawn to the life of the everyday people we meet in passing. “Peasant Wedding” is one such painting by Bruegel that portrays those people who are often overlooked by society.  A Genre Painting “Peasant… 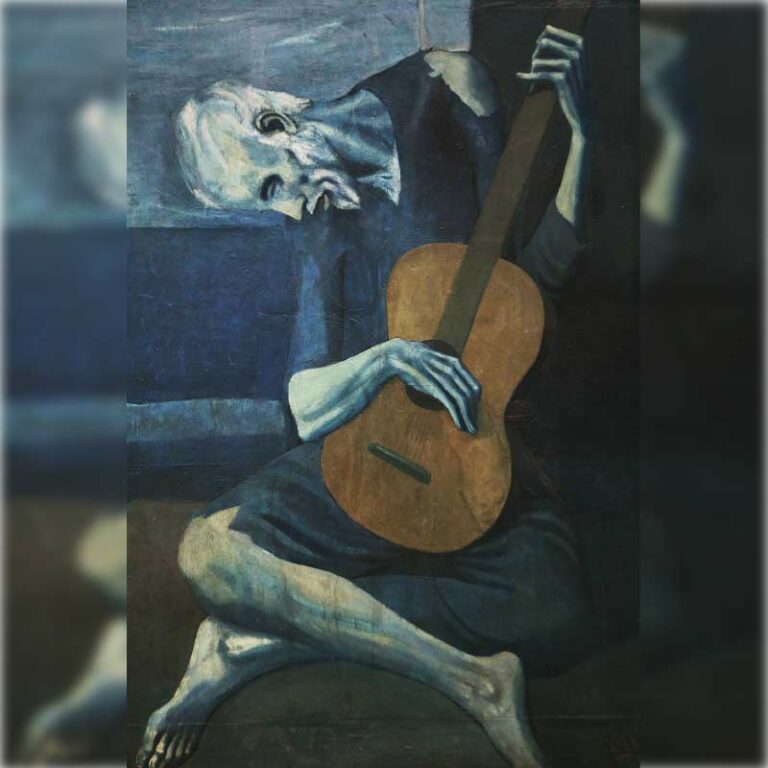 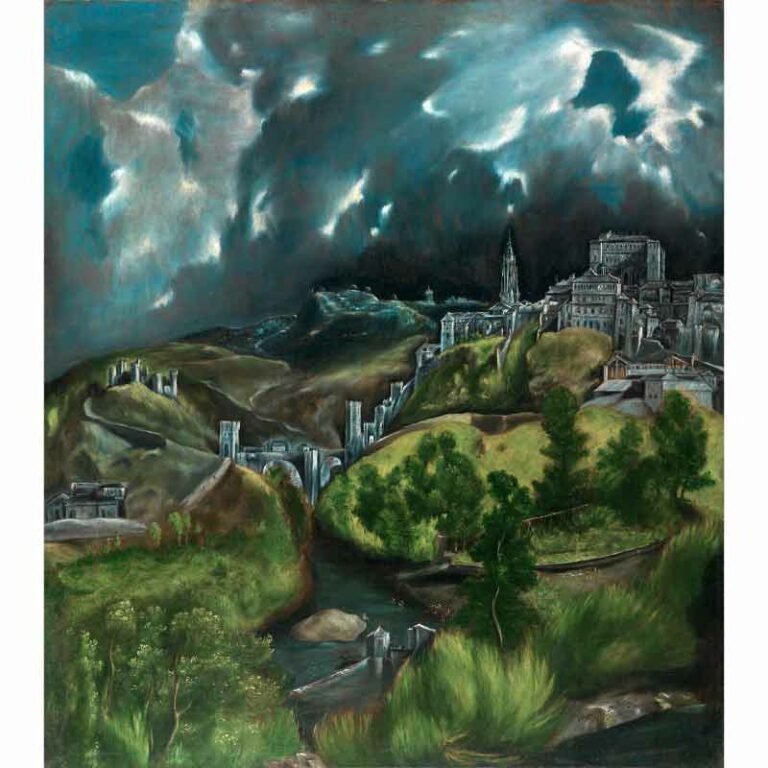 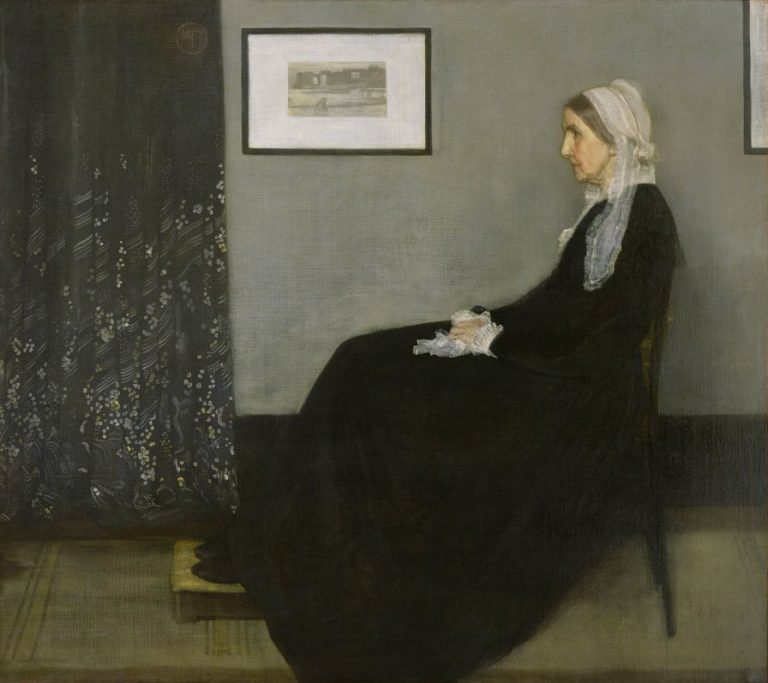